“He left me for another woman, a deceased one. They’re often the stiffest competition… no pun intended”.

You know it’s a Woody Allen film from the opening credits, they are in his trademark style of white text of a certain font over a plain black background, and as with many other Allen films a great cast has been assembled together, essentially for a complex and interwoven tale about unfaithfulness. It’s about two married couples (including Anthony Hopkins, Naomi Watts and Josh Brolin) who aren’t married for long in their original configurations, and watches them as individuals as they go their diverging ways to form new relationships (with people including Freida Pinto, Antonio Banderas and Lucy Punch).

The film is set in London. I’ve also seen Allen’s recent films ‘Midnight in Paris’ and ‘To Rome With Love’, which followed his recent love for using Europe as settings rather than New York as he used to. Woody Allen has got his own way of putting things that are innately humourous. There’s lots of very honest dialogue, often too much so with characters speaking very frankly and almost unfiltered. This has a nice way of conveying real feelings though, and is nice that it can sometimes come across naturally, especially in the case of Anthony Hopkins who really perfects the portrayal of a reluctantly aging man who ends up out of his depth.

My biggest gripe, such a needlessly tiny thing that stood out, was with the small part played by Anna Friel. She inexplicably had an Irish accent. There was no reason given why she had to be Irish, and it annoys me in films when actors have their accents needlessly mixed up. I think that if their accent is not a plot point or locates them geographically in a way that’s needed for the story, then why can’t actors use their real accents?

Anyway, apart from that I quite enjoyed this, it’s not my favourite Woody Allen film by far, but nor is it the worst I’ve seen yet. He has a great way for creating characters that even if they’re not wholly believable, they are nevertheless always interesting. Plus I love how he usually manages good conclusions, not trying to tie up all loose ends as many films needlessly spoil themselves doing. 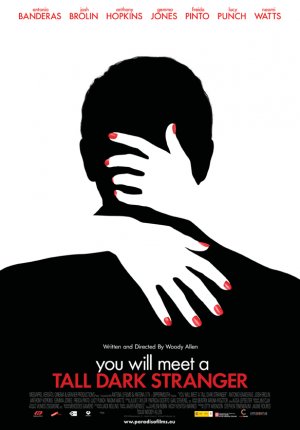 One thought on “#68 You Will Meet a Tall Dark Stranger”