I saw the film, made my notes on what I’d write about it, then I read up about the film’s production… It’s amazing how much of the development trouble came across on screen!

IMDb’s description  of the plot sums it up with “When a destructive space entity is spotted approaching Earth, Admiral Kirk resumes command of the Starship Enterprise in order to intercept, examine and hopefully stop it”. Obviously there’s a fair bit more to it than that, with Kirk (William Shatner of course) being joined by Spock (Leonard Nimoy) and the rest of his original crew from the TV show.

People think it must have run for many years and hundreds of episodes, when in fact the original series of Star Trek ran for  just 3 years and 79 episodes before it was cancelled due to low ratings. Thanks to syndicated repeats it gained a cult following, and that led to the revival here, 10 years after the original series was axed.

However this film plods, at times almost coming to a standstill. It really feels like the writers were struggling to work out how to make the difference between the 1 hour episodes, and an over 2 hour feature film. There’s far too much languishing and filler, which might not bother the hardcore fans who would put up with almost anything, but won’t serve well the purpose of bringing a wider audience to the franchise. Through my research after watching the film I discovered that this was originally intended as a pilot episode for a new series of ‘Star Trek’ a ‘Phase II’ to restart the TV show.

With that in mind, a lot of the original elements were revamped to try to freshen things up. The costumes were redesigned, and those iconic Starfleet uniforms ended up looking to me like a cross between hospital gowns and pajamas, really quite stupid when you look at them for long. The Enterprise was also redesigned a lot, and this was brought into the storyline with an important plot point being that Kirk isn’t really as familiar with his ship as he thinks he is. A key scene for the film is in the space port, where Kirk has just regained command of the Enterprise and is in a small shuttle with Scotty flying over to the ship for the first time in a while. It lasts FOREVER! The pace of this scene is ridiculously slow, with the shuttle moving at a snails pace and literally ging the long way round to inexplicable dock from the front, when it’s quite clear that this is done purely for the sake of showing the ship from a distance and at a really flattering angle.

For me,one of the things I look for in Sci-Fi is it being interesting, suggesting things in the future that are quite different from what are realities now. Ship design in Star Trek has always come up to the highest level on this criteria. The Enterprise is a great-looking spaceship, balancing on the fine line between conceivable and practical design, and what just looks cool and futuristic. The film also opens with Klingon ‘Birds of Prey’, again among some of the most interesting spacecraft designs ever put on screen.

It’s a shame the non-human characters in this aren’t quite so revolutionary. Spock has his ears, but you need to be looking at certain angles to even notice them at all. The other main alien character in this film is a female being from Planet IV called Ilia, who become somewhat important to the plot later on and has history with another crew member. Annoyingly though the only way she appears to be less than human is that she’s bald, and that’s it. In reality she’s indistinguishable from any other hairless human woman, and looks like a cancer survivor rather than another species.

There are quite a few dodgy bits to some of the other visual effects, but this surprised me when I saw Douglas Trumbull’s name at the end, especially considering his work on things like Silent Running. Again, this was cleared up in my research, that the effects company struggled to get their parts done, leaving the production not long before release date, with Trumbull being challenged to finish the effects off however needed to get the film ready for release on time.

The thing that made these films featuring the original series cast work as they did was the chemistry between main characters. Kirk, Spock and Dr McCoy especially are really fantastic together on screen, Shatner is always so intense with his unique delivery of lines, Nimoy plays the near-emotionless Spock in a way that draws you right in rather than seeming cold and repelling, then DeForest Kelley has such a lovable way with McCoy’s constant sardonic wit stuck between the two others.

Now with the benefit of hindsight this is generally regarded as one of the weaker films in what has gone on to be a succesful film franchise of 11 (soon to be 12) features, as well as the multiple TV shows that had varying amounts of success. It’s J. J. Abrams’ reboot that so far has proven most adept at pleasing both the ‘Trekkies’ and a wider general audience, plus winning over the somewhat jaded critics.

Based on what I’ve seen so far of the next film ‘Star Trek: Into Darkness’ due for release later this year, this beloved cinematic universe may have its best still to come. 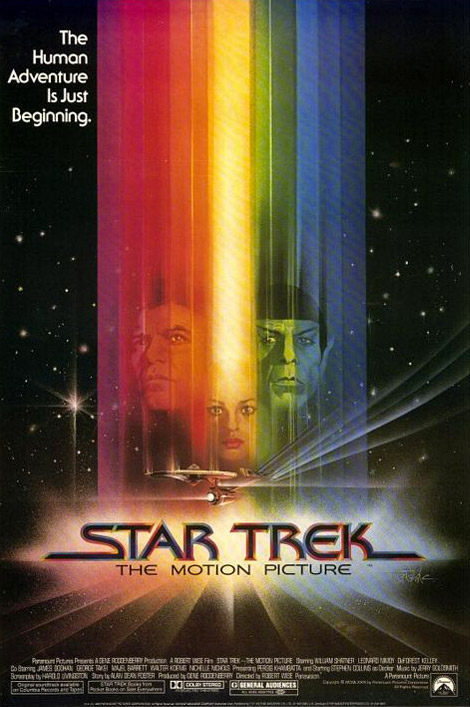 One thought on “#89 Star Trek: The Motion Picture”