The title seems to be a reference to Shakespeare’s ‘Merchant of Venice’, and within the knowledge of that lies a small clue to what’s going on in this film, as for a while it’s all very mysterious.

Muccino is the same director as Will Smith’s 2006 film ‘The Pursuit of Happyness’ which I’ve not yet seen, and obviously Muccino worked well with Smith. This film really revolves heavily around Smith’s mysterious character of Ben, an IRS auditor who acts somewhat strangely towards some people, including clients, asking questions that are obviously not standard. It is when he enters the life of a young woman with a heart condition that things get far more complicated, and he really becomes very involved with her and her life, wherein it becomes apparent that far more is going on with Ben than it seems at first.

The film is wise in the way it holds back details, taking a while before it becomes apparent what’s going on, and all the sense of it is held back until things are explicitly explained near the end. In getting there to an emotional conclusion there are some really beautiful moments, where the director shows off some skills in artistic direction, with striking visuals to compliment the narrative.

I enjoyed this greatly, and it makes me far more interested to take a look at ‘The Pursuit of Happyness’ now, as this film succeeded in being both well shot and brilliantly cast, with a narrative that holds together quite well, so I hope that the director’s other work is just as good. 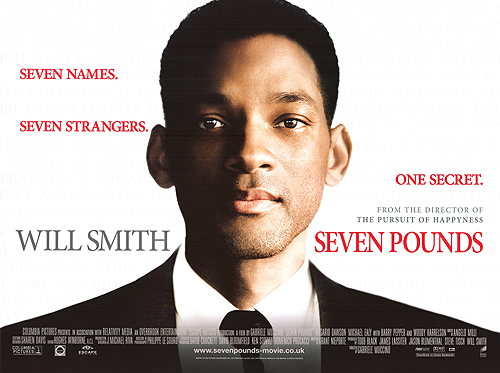