This is the first film for ‘Team Downey’, and though financially it was a moderate success and gained one Academy Award nomination, critically it fared quite badly and sadly I think for good reason.

Undeniably a ‘Grisham-esque’ drama in which a hot-shot city lawyer (Robert Downey Jr) returns to his small home town for his mother’s funeral, forcing him to interact with his estranged father (Robert Duvall) the local judge, who subsequently gets himself in legal trouble that requires the initially reluctant assistance of his son to resolve.

Firstly, there are some things that work well about this film, mainly thanks to the casting. Robert Downey Jr despite possibly taking on the role out of convenience feels like a very good fit, especially as we are used to seeing him exude overconfidence. He is effortlessly suave, his character comes complete with such upmarket accessories as a Porsche cellphone, and Downey Jr inhabits the role comfortably.

Where the cracks and flaws appear are in the writing of dialogue and interactions surrounding his central character. Hank’s personal moments, a fight with his wife, conversations with an ex-girlfriend and dealings with his dad, all lack a certain verisimilitude. At times in the dialogue characters even highlight how Hank fails in his personal life and can’t deal with people, and leaning back on having to state that so blatantly shows that this could’ve done with more work. There’s a rule often quoted in scriptwriting that points out you should make use of film being a visual medium by ‘showing rather than saying’ things. Rather than people verbally criticising the character for his flaws, they could be displayed, the audience aren’t stupid and if it’s shown well we would get the point that he’s not great at personal relationships.

This weakness continues in other parts of the film, such as the relationship between the main character and his brothers. These characters display an odd mix of personalities and traits, which sadly doesn’t always work convincingly. The film got its one Oscar nomination for Robert Duvall’s role in the ‘supporting actor’ category and undoubtedly his is a far more tonally consistent performance but I didn’t think it was particularly outstanding in the awards field, though it was a strength for the film.

Clearly the film suffers overall from a wildly uneven tone. It contains some very serious themes, yet the tone is considerably too light at times. Much of this is in the scenes featuring Dax Shepherd. His character is involved with some really serious themes, yet they are handled with an almost comedic sensibility which feels misjudged and jarring. The narrative is also over-packed, throwing in the family history and each character’s backstory and relationships, prompting a number of minor plot points and minor narrative threads that don’t all get sufficiently developed. There are also scenes that would feel at place in a rom-com, but this film doesn’t seem like it really wants to be a romance or a comedy, so surely it shouldn’t be so half and half. Often the film takes ideas, gets you interested in the thread, then drops them, it does this with elements of romance, comedy, plot points, revelations raised then left hanging while in court, all go to waste. Being a drama overall takes the focus of the film’s identity, so why have all these other elements included and wasted at all?

The film at a certain point inevitably turns into a courtroom drama, reinforcing the feeling that it’s really Grisham-inspired, though it falls short on his heights of inventiveness, and I say that being a longtime fan of Grisham’s novels so biased. There are undoubtedly some turns in how it unfolds but sadly nothing that amounts to a full twist or even anything surprising enough to seem particularly clever. I think the thing in the film that surprised me most and has stayed in my memory longest was seeing a chubby David Krumholtz as a lawyer in the men’s room, much of the rest of it has been long forgotten.

Despite the flaws, it’s still a promising start for the Downeys that clearly proves they have the ability to attract a strong cast even when the script itself is lacking, but if they want to go on to better acclaim in the future that’s exactly where their focus should go. There’s no point casting brilliant actors in roles that could suit them very well, and I include RDJ in that, when their dialogue and the storyline are disappointingly clunky and uneven. If this had been even a little more polished it could have been great, but at well over 2 hours long I just wanted the flaws to end and a final act of brilliance (that you might expect from a Grisham novel, sorry to make that comparison again) to kick in, but sadly it never did. 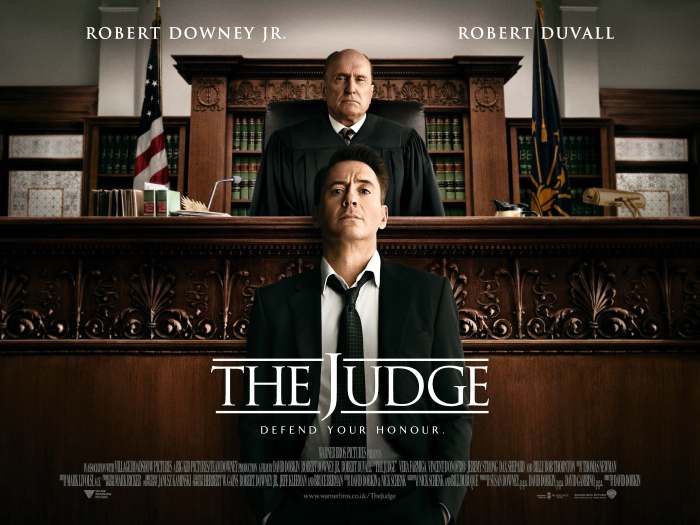 2 thoughts on “The Judge”