You might think the title is a bit of a strange one but believe me that’s the least unexpected thing about this whole film!

A man climbs out of his care home window on his hundredth birthday, going on an unexpected adventure which is far from his first!

It’s hard to say what to expect from this film, but if you think about a blend of ‘Amelie’, ‘The Straight Story’ and ‘Forest Gump’ you’ll be on the right tracks. In fact I’d like to think of this as ‘Forest Gumpsson’! Honestly, don’t think you can expect what’ll happen and where things will lead, unless of course you have read the bestselling book by Jonas Jonasson. Watching it I thought it was a really great looking film that felt like no expense had been spared to do justice to the novel and its popularity, yet it was made on a budget of less than $10mil.

It’s nominated for ‘Best Hair & Makeup’ at the Oscars next weekend, proving a point I’ve made a lot before, ageing people with skilful use of make-up looks far better than trying to achieve that effect through CGI. Most recently I had that problem with ‘Cinderella‘ in which Helena Bonham Carter is only briefly make to look older through the most obvious CGI that looked terrible to me. Same again in ‘Captain America: The Winter Soldier’ with just one scene that doesn’t look right, undermining the dramatic effect it was clearly going for. There are some brilliantly skilled make up artists who can achieve that look far more convincingly in their practical hands-on way rather than trying to do it with a computer and getting an end result that’s rarely convincing enough and for me it always distracts.

This film uses the same actor as the main character for most of the film, except of course as a child. Reading a little about him, Robert Gustafsson seems to be Sweden’s answer to Sascha Baron Cohen, he’s also a well-regarded voice actor, dubbing the voice of  Mike Wazowski for ‘Monsters Inc.’. Far from 100 years old in real life, and depicting this character for many decades, he’s made up brilliantly to age over than prolonged time. Yes you can tell it’s a younger man with make up but that’s far less a problem than knowing its a younger man with a CGI façade, you are more likely to suspend disbelief. Plus on this budget it’s more cost-effective when it’s not one or two brief scenes of ageing but the whole film in which the effect needs to be consistently and convincingly achieved.

His is not the only role in which hair and make-up is employed, there are many appearances from famous historical figures for whom the hair and make up is equally wonderful, bringing these famous faces and hairdos to life superbly well, rivalling many larger-budgeted Hollywood movies. Will it beat them at the Oscars? Possibly not, the competition is from ‘Mad Max: Fury Road‘ and ‘The Revenant‘. However it’s great to see this included in competition and it fully deserves the accolade.

I enjoy odd films and this is an unexpected oddity that managed to amuse me from start to end, constantly throwing humour and random events at me with refreshing frequency. I watch a lot of films so to see something that completely surprises me is always a pleasure. 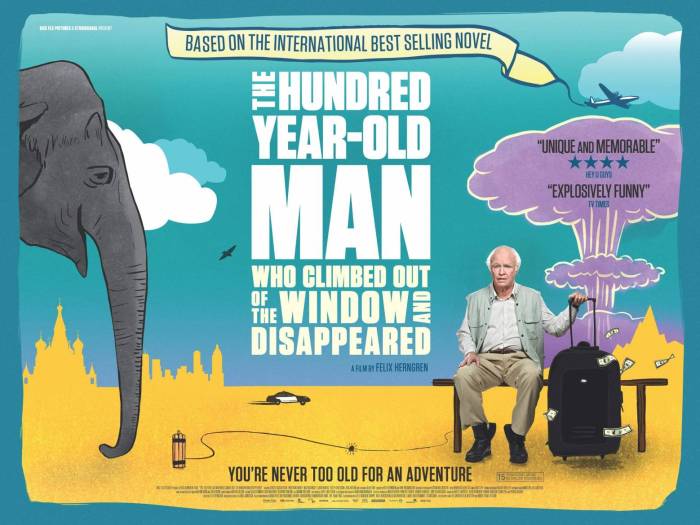 The Hundred Year-Old Man Who Climbed Out of the Window and Disappeared is nominated at this year’s Academy Awards in just one category, ‘Best Makeup and Hairstyling’, something it does a lot of in a very Oscar-worthy way.