The last of the ‘Best Picture’ nominees this year that I had to see and I’m so glad I did, it’s a lovely film which tells a simple story that may resonate with many, not least the star.

Adapted from the novel by Colm Tóibín, Eilis Lacey (Saoirse Ronan) leaves her mother and sister behind in Ireland as she moves to Brooklyn for work. After struggling with homesickness she begins to settle in and make a life for herself, before tragedy calls her home.

I love how one of the first lines Eilis says is that she’s “away to America”, though she’s clearly unsure about going and is instantly made to feel guilty about leaving her mother, it sets the story in motion straight away. We can grasp that this guilt is added to the mixed emotions carried with her along with feelings of homesickness which is soon followed by physical sickness on the rough passage across the Atlantic.

Eilis has no family or friends waiting for her in America, she’s very much setting out on her own with a few things in place thanks to an Irish priest (Jim Broadbent). Her demeanour is very reserved, a little shy, I think you could sum it up as demure. There are hardly any smiles at first, then she begins to warm up as she settles in, as she does her character and the film really blossom.

There are some lovely moments, especailly as her romance develops and Eilis takes lessons in eating spaghetti ready for a family dinner with her boyfriend’s Italian family. Things take a tragic turn when she’s at her best and things are really coming together for her. On her return to Ireland she meets Domhnall Gleeson, the actor this year with his finger in most Oscar nominated pies. It changes both the aethetic of the film, with the contrasting location and pace. As she keeps getting reasons to prolong her stay it is clear that when she left Ireland there was nothing there for her, hence moving to Brooklyn, now she’s presented with all that she went away for, and it’s developed in such as way that we feel for her and can see why she’s torn. It takes a friend’s wedding and a rude awakening to help her decide what to do, bringing about the conclusion.

There’s an excellent supporting cast, from key roles like boarding house owner Julie Walters and priest Jim Broadbent who are both really excellent and perfectly suited. To smaller roles such as fellow guest Patty played by Emily Bett Rickards (Felicity Smoak in ‘Arrow’) and Jessica Paré (Don Draper’s wife Megan in ‘Mad Men’), again all brilliantly cast. Really though it’s Saoirse Ronan’s film, she’s entirely captivating in this role. As seen in many of her past roles she’s very good at doing accents, thankfully here she gets to use her own, as does Domhnall. Though it’s adapted from a novel it’s almost as if the role was written for her, it suits her incredibly well and she’s been repeatedly asked in interviews how much she can relate to the story as she’s moved away from home because of her career. Saoirse Ronan exudes Irish charm in abundance and displays a range of emotions with such skill that it’s impossible not to warm to the character.

Part of the credit must go to Nick Hornby who adapted the novel for the screen and gets it right this time. Last year I wasn’t too impressed with ‘Wild‘ but this story worked very well indeed, his screenplay partnered with Ronan’s performance is an excellent pairing. I felt like every emotion and thought was conveyed beautifully, which was one issue I had with ‘Wild’, that I couldn’t fully grasp the character and struggled to empathise, here it’s easy to see how she’s feeling and why, making the film very effective.

It’s been such a success especially in the U.K. that the BBC are now working on a television series based on it, with Saoirse Ronan sadly unlikely to be involved, but Julie Walters is reprising her role. I’m not certain ow well it’ll work, but if they give their best to it, the BBC could make a really lovely show about Irish girls moving to start new lives in Brooklyn, I can see how that might be enjoyable.

There’s a sense of optimism and confidence by the end and I went from feeling as torn as she does, to watching the end credits with a sense of satisfaction, that not only was this the last of the ‘Best Picture’ nominees for me to see but it was a perfect way to end my Oscar challenge this year.

‘Brooklyn’ is nominated at the Oscars for ‘Best Picture’ and ‘Adapted Screenplay’ neither of which it’s expected to win, however Saoirse Ronan is seen as an outside chance with her nomination for ‘Best Actress’. It’s a wonderful film that sadly may take home no Oscars but will likely find continued admiration as people discover it on home release. 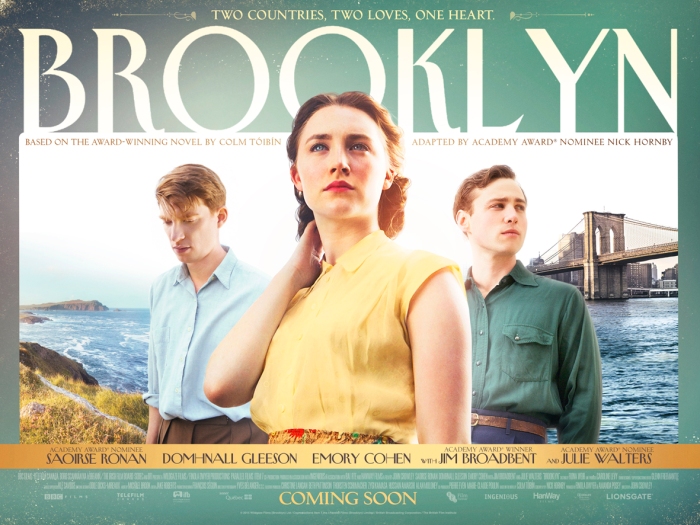