Is this fun? Yes. Does it conjure up a sense of the original series? Yes. It it the best that ‘Star Trek’ has to offer? Sadly not.

The crew of the Enterprise embark on what they believe is a rescue mission, only to find themselves facing a formidable enemy with a deep hatred for the Federation.

As soon as I saw the first trailer I had concerns, a niggling feeling that the balance of solid sci-fi to fun would be tipped by the change of director leading the movie franchise. Justin Lin has made some of the hugely financially successful ‘Fast and Furious’ films, but they are often plagued with issues, pushing the levels of credulity further with each film. While suspension of disbelief is more readily on hand in a sci-fi full of aliens, the distinct change after the last two Abrams directed ‘Trek’ films was noticeable.

It’s not that there’s nothing to like here. For a start I am constantly impressed by Idris Elba in almost everything he does and here as villain Krall he’s almost unrecognisable for most of the film, even his voice is quite heavily accented so you could forget it was him under the make-up. He’s a hands-on villain whose motives are revealed through the film, not in one monologue exposition dump, at times being quite menacing. I always appreciate a good villain who makes it clear why they’re such a threat.

Also the design of the alien ships and the space station are both fantastic. There’s a drone element to the enemy ships that’s a superb idea and is so interesting to watch while also adding functionality within the story. Whoever came up with the designs really had a stroke of genius there as they stand out.

Then there’s Sofia Boutella (‘Kingsman’) as new character Jaylah who adds a lot to the film, becoming an ally of the Enterprise crew and adding some heart along with the right kind of humour. All the scenes with her really worked well and I hope she doesn’t go the same way as Alice Eve in ‘Star Trek into Darkness’ by suggesting a promising future in the movie franchise then failing to make a return. Her prominence in the promotional materials would suggest the producers have realised what potential they’ve got here for an interesting new regular character.

Right from the release of a poster based on the one for  ‘Star Trek: The Motion Picture‘, it was clear that homage was likely. Evoking a similar feel to the original series turned out to be both a strength and a criticism of this film. In parts when it works you get the moments of camaraderie and chemistry between the key crew members, the sense of exploration with their ‘ongoing mission’ and even some hints of welcome nostalgia.

Where it doesn’t work is in overly referring to the original crew, especially in one late scene that added very little and would have been far better excluded as it takes the film over the line of just trying to recreate the feel of the originals and into an overly simple tribute. I think some of this fault may fall in the hands of writer Simon Pegg, whose love for the franchise is all too clear. If it were a fan film or the first of the new series that might be fine but it’s not, this is the third instalment in the rebooted franchise and as such should be well past the over-sentimental references. They wanted to pay respect to Leonard Nimoy, and rightly so, though a simple dedication at the end, just as the one added on in memory of actor Anton Yelchin, would have sufficed. By literally showing the original cast, the film crosses the line into a form of homage that might work for some fans but is more likely to just irk.

There’s also a time-lapse shot at the end of the film that looks a lot less cinematic than the shots around it, so while it would have been a lovely featurette or even disc menu background, in the film it feels oddly out-of-place, like when a single piece of archive video footage is cut into a new movie shot on film. This is another example of something that felt to me like a choice that should have been reconsidered and would have been better left on the cutting room floor or relegated to the deleted scenes. A more judicious director might have picked up on these things and neatly made the few cuts that would have avoided the film veering into dangerous ground.

There are enough aspects of the old-school ‘Trek’ that make a welcome return here to keep the entertainment-factor such that it redeems a lot of the flaws. ‘Star Trek Beyond’ zips along at great pace with a lot of fun and spectacle which is the least you might expect from the director and may be exactly what was wanted when he signed on for the job. If Lin is set to make a return with the next film, I hope that he and whoever writes it are able to put their urge for homage behind and ‘boldly go’ forward with the series, making better use of the alternate timeline that has been established to send these already-loved characters on new exciting and inventive missions. 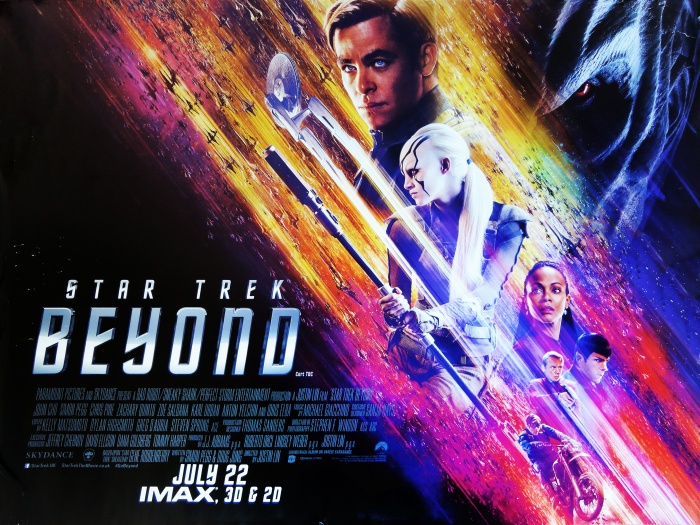 2 thoughts on “Star Trek Beyond”