With the huge success of ‘The People v. O.J. Simpson: American Crime Story’, the passage of time, as well as Simpson’s conviction in 2007, it seems like people now feel free to speak more frankly and critically about this notorious case. Here Ezra Edelman takes a step back from just that key part of the story, to give a wider scope on all the issues surrounding O.J.’s life and career that would all shape the way things turned out.

This is an epic (in the original sense of ‘long story’) documentary that covers the life and career of O.J. Simpson, encompassing the political, cultural and societal situations that would go on to have an impact on his famous court case and life.

A couple of months ago I watched the superb award-winning series ‘The People v. O.J. Simpson: American Crime Story’ (which I’d recommend to anyone, possibly even to watch before seeing this). So I thought I knew the story. I expect there will be people seeing this documentary who vividly remember the events shown, they too will think they know the story. This quickly proves that we never fully knew and certainly never understood the full story.

Director Ezra Edelman is known for his sports documentaries, so draws on that foundation and experience as the focal point was at first a sportsman. Yet this has a far wider scope than one man or the key court case, it introduces us to many events and civil rights issues, though it then brilliantly relates everything back to the focal point of Simpson. At times the focus is on another event, riots or legal cases, then it goes straight back to Simpson to show what he was doing at that time, sometimes what he said when asked about those things. It doesn’t use a commentary of any form other than the new interview subjects who explain all we need to know, at times leaving the connections implied and not specifically stated.

Beginning with footage of what looks like a legal hearing it sets a tone for what follows, this scene is brief but just enough to remind us that it won’t be a simple story, nor will it be the sports documentary it soon starts to feel a bit like. From that point on there aren’t nods or mentions to future developments, no ‘this would later lead to murder’ comments, it lays out the story from start to end almost chronologically, with a few sections that backtrack and a lot that runs in parallel, to show how things developed and affected each other.

The first part starts with O.J.’s time at university, much of which was filmed as he was a rising sports star, so there’s footage of training, his football games and even some interviews with him. Concurrently developed is the social scene, from locally in that part of the state and a little more widely too. The strands of the story are told separately at first, then they begin to converge, with archive interviews of even Simpson himself saying how he viewed these civil rights matters and the distance he kept from them. To add the needed explanation and details there are brief segments of fresh interviews throughout, we hear the views of activists, family members, friends and colleagues who are looking back on things, with hints of the effects of hindsight.

Of course the murder trial section is the best known part of the story and as I’d only recently seen ‘The People v. O.J. Simpson’ I had it clearly in my memory which meant I watched that part of the documentary in a different way, solidifying the parts I knew about and hugely increasing my appreciation for how well-made the series was. There’s an appetite for true crime, with things like ‘Serial’ and ‘Making A Murderer’ finding an active audience for detailed analysis of crimes and their subsequent trials, with this being one of the most infamous crimes in living memory, the time was right for this. The best of those other true crime documentaries try to stay at least partially neutral on the matter of innocence, letting an examination of the evidence lead the audience to make their own verdict. It’s difficult to do in this case, though I feel that the part showing Simpson’s career is done in a way that skirts very closely to a tribute to a beloved sporting icon (as is expected from ESPN and even the director), the further through the documentary we go, the more the weight of everything amasses to steer perception in a harsher light, one that makes him look very duplicitous and ultimately guilty.

My main issue with the documentary, long before I even saw it, is that I don’t think this is really a ‘feature’ documentary even though it has been recut and theatrically released to make it so. It’s excellent, justifiably the producers and distributors clearly wanted it to go for big awards, so with the Golden Globes not having a documentary category in either film or Television, aiming it for the Oscars was an interesting move. However at nearly eight hours long, this truly is more intended as a series than as a feature, with a similar running time to all three of Peter Jackson’s ‘Hobbit’ trilogy combined. So that made me dubious before watching this, though I set aside a day to give it the full chance by watching the episodes back-to-back in the way it was shown theatrically so I could review it in the way it’s being considered for an Oscar. By the end, I was astounded, it had fully justified the extended running time, none of it felt unnecessarily protracted, I was convinced it needed to be as long as it is. I still don’t know if I’d class it as a ‘feature’ but there’s no doubt it kept me interested from start to end, in fact I found myself getting more drawn in. I expect if watched in the way it was aired on TV, one episode for 5 consecutive nights, it would still have a powerful effect in the same way.

This is an incredible piece of work that deserves the praise it’s getting. Watching as a single, continuous film is a challenge, though it magnifies the effect Edelman is going for, linking in so many events and issues into the O.J. Simpson story that help to make sense of what seems like one of the biggest legal injustices in living history.

The documentary has won numerous awards already, now being nominated for ‘Best Documentary Feature’ at the Academy Awards. I think this may be a trend-setter, inspiring other documentary film-makers to release their series’ theatrically to qualify for consideration. If they’re all striving to be an outstanding achievement such as this then that’ll be a nice trend to set, yet that will be hard as this is a monumental achievement in documentary film-making that’s far more deft and justifiable in its form and handling than most other documentaries. 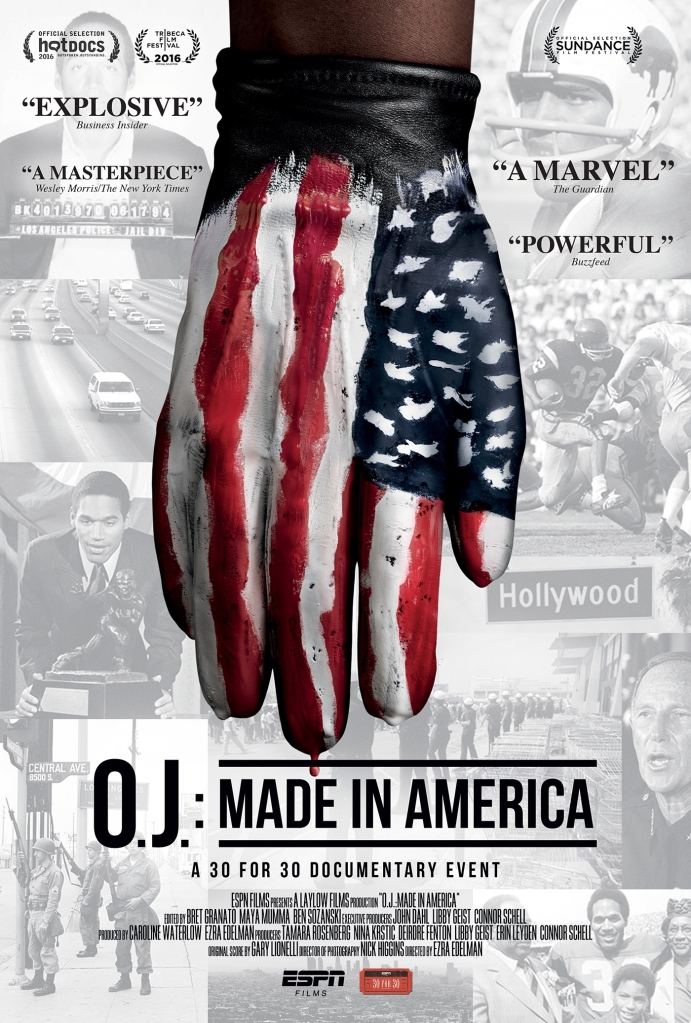