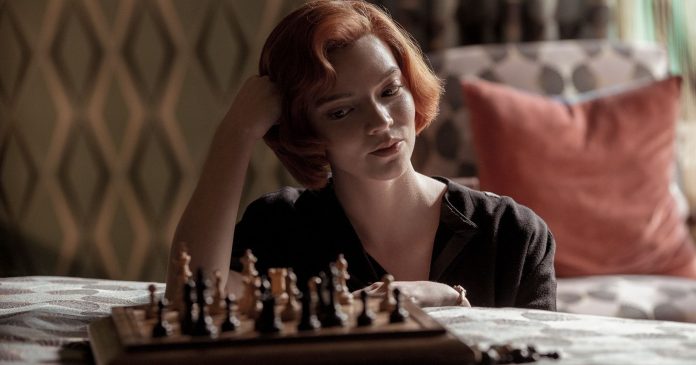 When I watched this on the weekend of release, I thought it was a shame that it would only have limited appeal, I didn’t expect the widespread success it’s enjoyed, getting amazing word-of-mouth about the captivating story of one complex queen, a handful of hopeful knights, and a few formative pawns.

Orphan Beth (played from her early teens onward by Anya Taylor-Joy) is discovered to be a chess prodigy when taught the game by a kind janitor at her orphanage. Driven, partly by necessity, she competes in increasingly high-level tournaments, battling international grandmasters, while fighting personal battles that threaten to ruin her life.

Initially, I like many (including YouTuber Jeremy Jahns and all the people who’ve contributed to the top suggestions on the Google search) thought this was based on a true story. Instead, it is based on a novel by Walter Tevis, adapted by Scott Frank (‘Minority Report’, ‘Marley and Me’ and ‘Logan‘) who also directed all the episodes, giving it consistency and cohesion.

Largely following the core formula of many sporting films. We follow the aspirations of an underdog who’s also from a troubled background, distinguished by how skilled they are in their chosen sport or game, as they compete at increasingly prestigious levels, leading to an eventual face-off with a formidable opponent. Chess hasn’t got the same kinetic energy as many sports, there’s no racing across football fields, shooting hoops, or even the easy to follow accumulation of numbers on a scoreboard. Yet, it does have defined matches, with clear wins and losses, so once the basics of the game and rules are explained as required, even someone who hasn’t got any knowledge of chess at all could grasp enough of what’s going on to be invested in the fate of the lead.

It’s been an interesting year for Anya Taylor-Joy. She starred in Austen adaptation ‘Emma.’ (which I’ve not seen yet) at the start of the year, the long-awaited and ever-postponed ‘New Mutants’ in the middle, and then ended it with this series, a great way to top things off. It’s so good that I’d just sat down to watch a little something and thought I’d try one episode to see if I enjoyed it, then, quickly decided I was in dire need of a full rest day and binged the whole 7-episode season in one go.

Clearly, Beth’s a formidable prodigy but thankfully not an infallible ‘One Punch Man’. Winning, though the assumed progression for a character like this in a competition-based story arc, is not presented as an inevitable foregone conclusion. Oftentimes her own worst enemy, Beth’s struggles with addiction and mental health, repeatedly put her success, even her life, in considerable jeopardy.

It’d be easy to assume that there would be some romantic plotlines to this story, featuring as it does characters in their teens and twenties with shared passions, yet that never becomes central. Surprisingly, there’s far more checkmating than mating. Though there are moments of attraction and some relationships formed, it’s not a story that considers romance as a pivotal force, not something that particularly shapes the character. More than that, it presents, develops, and highlights some strong female characters who, let down by men in their lives, have to find ways to be independent, and what’s formative to the characters is their success or failure in that. There’s no ‘King’ in their lives, and I think the series eventually brings us round to settling on the realization that Beth doesn’t need one.

Marielle Heller, director of ‘A Beautiful Day in the Neighborhood‘ made a rare return to acting, playing Beth’s adoptive mother Alma. It took a little while for me to really warm to her character, maybe as she’s portrayed so well with complexities and mental health difficulties that make it hard to get a quick or easy read on what sort of woman for a couple of episodes. As with Beth, when the men in her life take a backseat and better sense prevails, Alma is more fully developed to the point of not only getting to understand her better but quickly empathize and warm to her a lot.

At one point Beth’s interviewed by a journalist who suggests the chess pieces represent certain figures in her life. She’s angling one way, but as I see it she was on to something. Beth’s the Queen, she’s the one to watch, moving far and quickly. There are men with whom she forms close friendships, a few of whom would like something more, all hopeful Knights. Then there are minor characters, seemingly pawns to the story, who make a move early on, then get forgotten about until much later, when those that are still standing are positioned in a way that’s unexpectedly key to the queen’s advancement.

Sometimes it’s a little difficult to track the passage of time as Taylor-Joy plays Beth from her early teens all the way into her later twenties. As she doesn’t look quite young enough for the first few years, after getting my head around her being 13 or so, it’s then a little difficult to readjust as she’s coming of age, bringing in more mature issues and experiences while she looks largely the same. Some passage of time is conveyed through costuming and hairstyling, which helps, but still, I found myself taking concerted notice of any dates and doing the quick maths in my head or noting any reference to her age and thinking on it for a moment so I could realign my expectations to the character being that age.

The 1960’s setting works really well for many aspects of the story and production. Real-world this was the era of Bobby Fischer, someone whose story has been explored in films and documentaries in recent years. The period gives scope for all the style, decor, and striking fashion. The costume designer has had a great time it seems, getting to design and pick pieces for the era and dress Anya Taylor-Joy who was recently quoted in an interview as saying she doesn’t think she’s attractive enough for movies. Yes, the woman who was spotted shopping and signed as a model, then after a few years is the lead in multiple high-profile shows and films, said that. She’s got one of the most unique looks of anyone in film right now, you don’t confuse her with anyone else, and that’s clearly a valuable asset to the director and costume designer, showcasing her striking appearance while matches are wordlessly fought.

Like a masterfully-played game of chess, by the last two episodes it starts to become apparent how the show has been playing a complex long game, focusing your attention on certain things advancing while moving pieces into place for a satisfying payoff from elsewhere. Characters, narrative loose ends and emotional arcs assemble in a way that redeems a lot of elements that otherwise were feeling unfinished or unfulfilling.

About a week after release, this was tagged on Netflix as the number 1 item in the UK, not just series, but topping everything, and there it stayed for a fair few days (though I couldn’t give an exact period). It’s still in the top 5 now well over a month later. That’s amazing as it seemed a little niche, though as I was watching it was quickly clear it would be a critical success, I thought the chess-playing story might not appeal to a wide audience, I never expected that over 62 million people would give it a try. Neilsen streaming ratings have recently confirmed it was the most streamed show for a few weeks in November. While many other additions to the service have had their day and then quickly dropped from favour, this lingers, as it does in the mind, as something of particularly high quality and depth.

Though it’s billed as a limited series, it’s not unheard of for shows like this to do so well that a second season gets developed to capitalize on the popularity. Given that it involves competition, it would be easy enough to bring Beth back to face new opponents or old ones wanting to reclaim victory, think ‘Rocky’ but on a chessboard. I’m not going to hold my breath for that a season 2 to happen, but I would be happy if it does, though Scott Frank and Anya Taylor-Joy are reuniting for an adaptation of ‘Laughter in the Dark’ anyway so they’ll be busy for a while but at least we’ll have something else to enjoy from them.

4 thoughts on “Review: The Queen’s Gambit”