Who is Mank?
Herman J. Mankiewicz (played by Gary Oldman) was a screenwriter in the 1930s and 40s, the era of the studio system. He’s chosen by Orson Welles to write the screenplay for his first film, one that would become supremely famous.

When in Mank’s life does this film cover?
It’s particularly focused on his writing Citizen Kane, and cuts between him working on the screenplay and some of the events leading up to, and ostensibly inspiring it. There’s been some dispute as to how much writing credit Welles himself should get, which the film doesn’t exactly answer, except by largely omitting him from any scenes involving the writing process, making it seem as though Mankiewicz was the sole writer.

How is it shot?
This is almost the definition of pastiche. Fincher wants this to look like a film from the era in which it’s set, essentially being “the writing of Citizen Kane in the style of Citizen Kane”. It’s in vivid black and white, though the aspect ratio isn’t the same, so at least that concession was made. However, it rarely looks half as interesting as ‘Citizen Kane’ does. That film is famous for its inventive camera angles, and bold framing and focal choices. I wanted this to be equally interesting to watch, not by copying Citizen Kane, but by aspiring to be equally as inventive with its choices, but it’s not, it feels very safe and disappointingly dull.

What is going on with the sound?
Exactly what I asked myself after a few minutes. I had to pause, check my home cinema system, check my Netflix options, then check Google, to be sure it was meant to sound that way. Though my home cinema confirmed it’s in Dolby Audio, there’s a lot of effects in the mix to make it sound like an old film, and apparently even more so in the Dolby version that I was listening to, to give the feel of listening in a theatrical setting. While it sounds very authentic, film sound from the era is not particularly pleasant to listen to now. It’s a skilful job that’s been done (you can read more about it here if you’re interested), but one that felt a little unnecessary, maybe just a step too far and really offputting.

Why did this get made?
Citizen Kane is widely considered the greatest movie ever made, and the stories and rumours about the people who made it and what inspired them to do so have been Hollywood lore for over 80 years. I understand why David Fincher wanted to make this, his father Jack wrote the screenplay, though it went unproduced for decades. Maybe there was a reason why. It’s too long, a film about writing ‘Citizen Kane’ shouldn’t need to be longer than Citizen Kane. Nobody else has been credited with this screenplay, not even David Fincher, which may be because he wants his father to receive full credit, or it’s possible that he’s left it completely unchanged. That seems very plausible as there’s much that could have benefitted from extra refinement, it really does feel like an early, untested draft. Another thing is that ‘Citizen Kane’ holds your interest with a clever mystery that runs throughout, and though I’d had it spoilt for me as it’s in the zeitgeist, that film still never bored me. I watched it just a couple of weeks ago in preparation for seeing this, it has quiet and slow parts, but they held my attention, ‘Mank’ didn’t. I found it very hard to stay engaged, and I wish I could blame myself, tiredness, or anything else for that, but though masterfully made from a purely technical standpoint, the film feels like it’s lacking something fundamental. While it excels at looking and sounding like it’s from the era, something about the film and the characters feels inauthentic, to me, it’s as though the performances were the actors playing their roles as actors of the 40s might have done. In effect, it feels like we’re watching people acting, not living.

Where can I watch this?
It’s a Netflix film, and I think that’s key to why it finally got made, especially in this form. Similar to RKO’s contract with Welles, Netflix is in the habit of trying to build relationships with revered writers and directors, giving them unprecedented freedom (and at times even budgets) that poach them away from other networks and studios. David Fincher has been given the opportunity to make his father’s passion project to honour him, nobody can blame him for wanting to do that. Unavoidably though, a bar is set by the subject, so while it may live up to his father’s vision, it has no hope of living up to Citizen Kane, and adds little to the unassailable legacy of that classic. 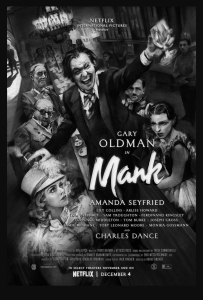 Nominated for 10 Academy Awards, more than any other film this year, I think Mank might be one of those films that gets nominated for lots of Oscars but wins none at all. Its best chance at a win is with ‘Production Design’, then next best is maybe ‘Best Cinematography’ as it was a bold choice to shoot straight in black and white, though this goes hand in hand with the production design that had to choose colours that would pop even when in monochrome. I’m going to be eagerly watching the BAFTAs this weekend where it has similar nominations to see how it does, but I wouldn’t be surprised if we don’t hear “the winner is Mank”.