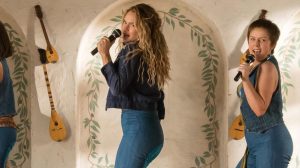 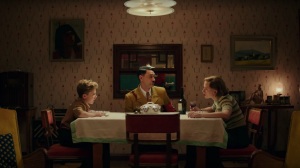 A few weeks ago (maybe a bit longer now that I’ve taken so long to catch up on finishing writing) Entertainment Weekly reunited the majority of the cast of ‘Scott Pilgrim vs. The World’ for a Zoom ‘table-read’ of the full script on YouTube. I am a huge fan of that film, ever since I first saw the trailer in the cinema over a decade ago and immediately loved the parts it showed, then completely loved the full film when I saw it in the cinema a couple of times in the first week of release.

Immediately clear is how well the script really holds up as a brilliant piece of entertaining writing even without the extensive visual effects, seeing it performed like this puts the focus entirely on the clever dialogue, compelling characters, and surprisingly complex story.

It was great to see so many of the original cast, many of whom have gone from strength to strength, making time to connect for this reunion. A decade after the film was in many cases one of their first major roles, almost half of them are now busy being A-listers and in many cases superheroes, yet most of the big names have made themselves available and are giving it their all.

The same week this was released I’d installed a new home cinema sound system and it dawned on me that Scott Pilgrim would be a perfect film to test it with, the mix of dialogue, fight scenes with loud explosive sounds and energetic musical performances make it an excellent tester movie. Often when testing a home cinema adjustment I’ll pick a scene or two with a feature I’m particularly interested in, skip to them and confirm the changes have worked. I found myself, just 24 hours after having watched the film read through from start to end, watching the movie in its entirety, it’s that good.

The read-through highlighted so many things I’d previously vastly underappreciated. Knives Chau is a bigger and more important role than I remembered, certainly one I’d not given full consideration before this, a reassessment greatly helped in this form by Ellen Wong being so enthusiastic. When I then rewatched the movie I found my attention refocused on the character and how complete and satisfying her story arc is. The film may have some mixed messages on relationships and fidelity, however, it makes the point clear that you want to keep on good terms with your exes or it may come back to kick you in the backside, literally. If that’s all you take away from watching the film or the table read it’s time well-spent.

Not far into listening to this audiobook being read by Trevor Noah himself, it became abundantly clear that this is a perfect example of the benefits of hearing the author reading it over reading their own words, especially autobiographical ones, over reading from the page for myself. Not only couldn’t I bring all that’s needed to this story, but I’d unintentionally take a lot away from important aspects of it.

An early-years autobiography of Trevor Noah, the South African comedian who was born to a black mother and white father in the Apartheid era. His life is fascinating and much of the focus in this book centers on the key point of the title he was essentially born a crime, being of mixed race in apartheid South Africa, his parents’ relationship was illegal and he was living evidence of that.

I’ve often enjoyed Noah’s stand up, I saw him on UK TV years ago on a show that features a few 10 minute stand up sessions, he stood out as my kind of comedian, whose comedy is built on a foundation of intelligence and an interesting perspective. When, years later, he was announced as the person who’d be taking over from Jon Stewart as host of the Daily Show I immediately saw the potential, he’s really intelligent, multilingual, multicultural, well-read, and all these things that make his comedy interesting, give him a perspective on current events that’s usually worth hearing.

Throughout the modestly apportioned chapters, Trevor Noah builds a clear picture of his childhood, the state of the country, the changes it underwent, and the resilience of his mother and himself to make the most of their circumstances, brilliantly detailed though the events recounted are sometimes spaced far apart. The final chapter has some of the most dramatic events that other writers might have at least teased in the opening chapters, if not used as where their story starts.

A key part of Noah’s story is his ability to speak a selection of African languages, and when he reads accounts of his own life he gives the characters what are presumably approximations of their own accents and voices, and even a more minor point is that he’s able to pronounce their names correctly. If I was to read it in my head it would be at the very least inaccurate, if not unintentionally but unavoidably racially insensitive. 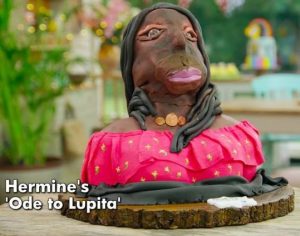 Based on Trevor Noah’s stand up I was already looking forward to the feature film adaptation that’s in development, with Lupita Nyong’o already signed on to play Trevor’s mother Patricia, but now I’ve heard the book I’m convinced this is going to be a really enjoyable film and if handled aright it could even be a major awards contender, unlike this cake that was recently made on ‘The Great British Bake Off’ (or ‘The Great British Baking Show’ for all you Americans), that was meant to look like Lupita Nyong’o.

After enjoying the author’s reading of this book so much, I think I may now do this as my routine method for enjoying works of non-fiction. In this instance it was almost vital to have him reading it as anyone else would have been unable to give all the pronunciation, intonation, or accents that brought the account to life and greatly deepened my understanding of his experiences. 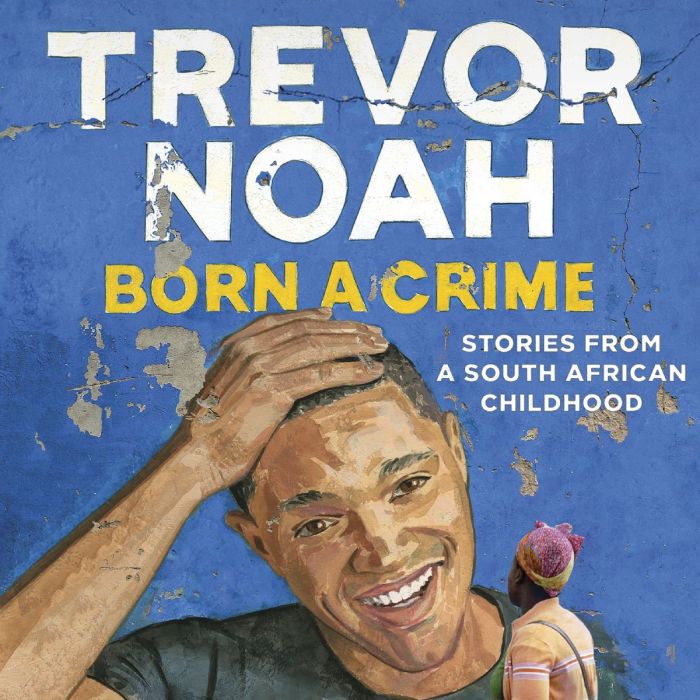 Born A Crime is available in multiple formats, including a child-friendly version of the book for younger readers which I think is a really brilliant idea to bring this story that’s full of lessons on racial issues to a wider audience and possibly even makes it suitable for use in classrooms. My firm recommendation is to download the audiobook read by Trevor Noah himself, it’d be a great use of an Audible free trial for example, as he brings linguistic abilities that few readers would be able to even attempt, that greatly maximizes the enjoyment and understanding of his life and story. 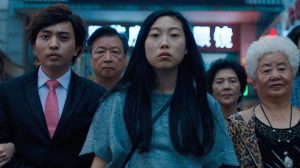 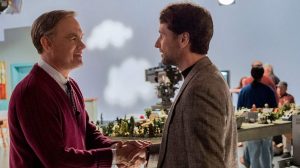 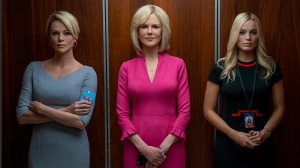 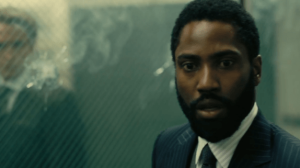 Filmed in the summer of 2017, the first trailer for this Marvel comics movie in the universe of the X-Men came out in October 2017 with a theatrical release date set for April 2018. This was then pushed back, not once, not twice, not even thrice, but at least four times!

The Fox/Disney merger caused huge uncertainty with a number of projects that were in early stages of production but as this was essentially finished already and undergoing some reshoots it seemed to be shelved for a while, surprising many when it did get a new cinematic release scheduled under the Disney ownership. All seemed positive for it to come out in April until the COVID-19 pandemic pushed all movie releases back, making this a punchline and declared ‘cursed’ by critics and pundits.

Disney announced this week that they’re pushing everything else on their schedule back again, most imminent of these was ‘Mulan’. It wouldn’t have been surprising then for this to be included in the list of films getting new release dates, though as it’s already been pushed so many times it seemed like it would be taken off the release schedule altogether and instead just go to streaming, but, as it’s not a good fit for Disney+, Hulu isn’t international, and pre-existing agreements seem to suggest it would have to go to initially HBO Max (also not international) as an exclusive streaming platform.

With the ComicCon panel online sparking rumours it was about to have a new date (the same day Disney moved a bunch of other titles to new dates) or be dropped on streaming, which would’ve been a great way to do it if that was what they were going to do, in the end, the panel brought neither. So, when the perfect opportunity to move or release the movie passes with nothing changing, ‘New Mutants’ now stands as one of the very first new wide releases on the schedule and by far the best known.

That leaves us with two possibilities. One, it’s about to be moved back yet again but Disney didn’t take the prime opportunity to announce that. Or two, something that could be sheer brilliance, ‘The New Mutants’ is going to get released as scheduled on August 28th, becoming one of the first new movies in cinemas in months.

Recently there have been other films proudly announcing that they were going to be deliberately releasing as one of the first new wide-releases, some suggesting they were doing it altruistically to benefit cinemas, others admitting they hoped to boost their box office chances. ‘The New Mutants’ wasn’t seen as one of those, it was caught up as a victim of the international cinema closures, yet now, by apparently holding to the once merely optimistic August date, it may give Disney an opportunity to turn a long-shelved, almost scrapped, troubled production, into at least a modest box-office success.

Marketing the movie with a stronger emphasis on its X-Men ties, a young cast popular from ‘Stranger Things’ and ‘Game of Thrones’, even highlighting the director’s huge success with ‘The Fault in Our Stars’, could tempt people, especially those who are not in the older, vulnerable groups, back out to cinemas.

When it looked like the film was being shelved and reworked, this seemed unlikely to get people into even a quarter of the seats in cinema screens, now, after there have been next to no new films released for nearly half a year, this has a really good chance of filling every available seat in many cinemas. Being as it was a film that might have originally been put into just one or two of the smaller screens with a few slots per day, it’ll now get a far bigger release than even the last X-Men film, potentially taking half, or more if popular, of the empty screens. What a potential turnaround.

I’m hoping this actually is Disney’s plan, if so it’s a brilliant one, though I’ve got to resign myself to the more likely scenario that it’s either about to be rescheduled or reshelved yet again. I hope not, because I’m not the only one who has gone from originally only going to see this at the cinema if I heard really excellent reviews and found myself with some spare time and money, to planning to see it at my earliest possible convenience because I’m desperate to get back to seeing things at the cinema and a weird psychedelic super-powered horror could be just the ticket! 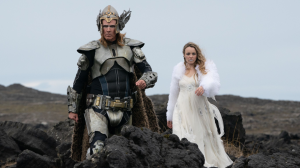