Last weekend James Gunn started an impromptu Q&A session with fans on twitter, and this happened:

“@TweetTinyTim: which Marvel character do you wish you could reclaim the rights to so they could appear in your films?” ROM Spaceknight!

I’m @TweetTinyTim, so as you can imagine I was beyond excited! Immediately I moved this film, written by and starring James Gunn, funnily enough as a superhero known as ‘Minuteman’ (as in small not the measurement of time) whose real name is Tim, straight up to the top of my superpowered ‘to watch’ list.

‘The Specials’ are the 6th of 7th best team of superheroes, lesser-known and lesser-used, they have a regularly changing roster of heroes with powers that are on the stranger end of the spectrum. Newest member of the team Nightbird (Jordan Ladd) really picks a difficult day to join, with their line of toys being released and some secrets surfacing, team leader (Thomas Haden Church, ‘Spider-Man 3’) is tightly-wound and about to be pushed over the edge by charismatic Weevil (Rob Lowe).

Don’t go in to watching this film expecting ‘The Avengers’ or even the ‘Fantastic Four’ (not even the unreleased Roger Corman one), this is simple low-budget film-making that puts the focus on an original premise, a day in the lives of superheroes when they’re not being super, rather than any fancy effects or dramatic action. There are large parts of the film that are done in the style of an informational video on the team, and the rest though not filmed as such, could almost be seen as a fly-on-the-wall perspective, giving an insight on superheroes that’s not usually shown on film. Part of this unconventional story is the less heroic behaviour, affairs, strong language, awkward flirting, things that we don’t see from most heroes and being an alternative to the narratives of big blockbusters is clearly part of the point.

“Superheroes don’t get Oscars, we get action figures” says one of the characters in the film, 15 years and billions of dollars later it’s still true. James Gunn himself wrote that line, and last month he wrote a piece online about how at this years Oscars it seemed to be the in thing to take a jab at this genre of movies. Yet, it’s these big budget and high return films that are helping the studios financially, that in turn can mean they can finance other films, and even take chances on indie directors being given big franchises to work on. In fact, one of the frontrunners at this years awards ceremonies was ‘Birdman’, that while criticising superheroes still saw fit to make the most impressive set-piece of the whole film in the style of a scene from a superhero franchise movie. One of the people to make such comments, Dan Gilroy, writer of ‘Nightcrawler’, is married to Renée Russo who has been in both the ‘Thor’ films, and he himself was one of the writers on the aborted ‘Superman Unbound’ and is currently working on a project with Stan Lee, so talk about biting the hand that feeds you. Then there are the actors, who while being lauded for certain roles over the last year, are most of them coming from or going to comic related projects. J. K. Simmons starred in 3 Spider-Man movies, Miles Teller is in the upcoming ‘Fantastic Four’, Felicity Jones was in ‘Amazing Spider-Man 2‘ and Benedict Cumberbatch is soon to star as ‘Doctor Strange’. I could go on, but both James Gunn and I have made our points, and they are solid. This genre has a place in the world of film, it has done for many years and will continue for the foreseeable future, mocking them is foolish.

It’s been a strange few weeks for me and my love of superheroes, as two weeks ago I sadly failed in my attempts to get tickets to Comic Con, but then a week later had a twitter reply from and later even a ‘favourited by’ James Gunn, director of the best comic adaptation film of the last year! James Gunn’s reply then went on to get hundreds of likes and retweets, with my phone regularly notifying me of these as I’m mentioned in them. Then the tweet was quoted and embedded in stories on websites that take an interest in comics, and movies, websites that I read. For a man like me this has all been understandably very exciting!

It’s really great sometimes looking back on a directors work and seeing how things have led up to where they are at now, from writing and starring in this low-budget film that showed such love for the genre and unconventional way of looking at the lives of these characters, through to going on to become a key player in the massive Marvel Cinematic Universe. I hope that James Gunn continues to retain his love for the genre and keeps that sense of fun and mischief alive in his future projects, as that’s what made ‘Guardians of the Galaxy‘ so incredible, and helps to distinguish the MCU from the more sombre adaptations of recent years. ‘GOTG2’ is shaping up to be a really exciting film in so many ways, and there’s no doubt that Gunn has big things planned, though beyond that I do hope he gets to write a comic, and will maybe even one day feature Rom SpaceKnight in one of his films and then win an Oscar for it! 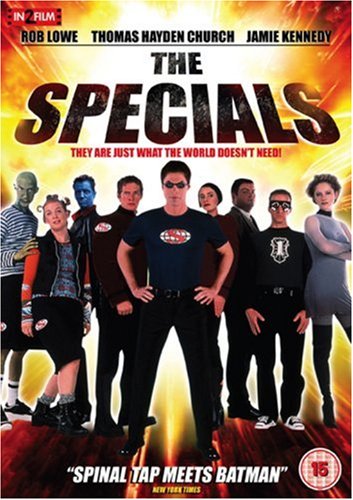